I've wondered what the views of Lake Louise would be under a starry sky; I started my trip to the Rockies with a hike to the end of Lake Louise's "Plain of Six Glaciers" trail to photograph the night. I began hiking in at the time everyone was coming off the mountain -- interesting shots are often that for reason of challenge or chance; I wanted something different.

I took a few shots of the lake near the main viewing area before hiking in; in the above shot I'm using an "ND400" filter, the filter appears completely black, much like a welder's lens; it allows 1/64th the light through (-9 exposure stops), this way I can expose the shot for 3+ seconds (100iso @ f/8), removing all crispness in the waves and creating a silky glass-like effect. This shot was done in a similar fashion; it shows just how green the foliage was; I had been watching the weather and went on the first sunny day after a week of rain.

At the end of the Plain of Six Glaciers trail you see Victoria glacier; in the 360 you can clearly see how the glacier melts into Lake Louise; the lake's unique colour comes from the glacial flour, particals of rock in the glacial melt. The water is VERY cold, some people brave a (brief) polar bear swim here in the summer -- it's always fun to see how long they last ;).

I was able to see at least five shooting stars in the eastern sky, shooting above the Fairmont Chateau -- this was the beginning of the annual Perseid meteor shower (see the timelapse video I shot of the 2008 Perseid meteors here). The stars would streak across the sky, larger meteors leaving a lasting emerald glow; laying back on the rocks the stars vividly took up my entire field of vision, even with the full moon the stars were incredibly bright pinholes through the sky. People in the chateau had paid anywhere from $400 to $2,000 that night, while I had the best view. . . though not the warmest ;).

Staying warm was difficult. This was my first "non-camping" overnight trip and I underestimated how cold it would get. I packed my warm gear in a stuff-sack, all together I wore: one wool t-shirt, one long-sleeve shirt, one fleece jacket, toque (pulled down so far that I could barely see), scarf (wrapped around my neck and around my face up to my nose), gloves, hiking pants/boots and even with physical activity (doing burpees every 30mins to keep my heart rate up) I was very cold. The wind was blowing towards Lake Louise; I hunkered behind some large rocks for shelter, there was nothing comfortable about it, but was shelter from the wind. The weather forecast said a low of one-degree Celsius overnight -- it was at least that, then factor in wind chill. I was surprised the water in my pack wasn't freezing, it stung my teeth with every sip; hiking in the water was warm and unpleasant to drink; this area is very harsh with a drastically changing climate, I find it amazing animals live here; the night gave me a respect for the climate they endure day after day.. and this is the hot season!

I suppose the rocks I was hunkered under belonged to a marmot, this guy would sneak up to me, make an "eeeeep!" sound as though to say "Hey! These are MY rocks!", if I moved to another rock he would stay between those until I returned. While the greeting was rather funny, his personality reminding me of a character out of an Ice Age movie, I didn't like the thought of any predatory animal hearing this and perhaps wanting to investigate; food and vegetation is scarce here so I felt safe from large animals, I don't see how they could survive here, however if there was one here, I imagine they would want to track that marmot down. Of course I checked with the parks office for wildlife concerns in the area before staying the night. Around 3am I noticed something walking on the trail, it was small, the size of a large housecat, being so dark it was only a blur moving, I was worried it was a cub of some kind, I scared it off and it turned around, flaring it's fur; it was a porcupine! It would later come back a few times, walking rather obliviously and always be completely surprised/shocked when I made a sound, at exactly the same place; it would again scurry away and roll into a ball. It was coming close and I wanted it to be aware of my presence.

The moon rose above the mountain around 11:00PM, prior to that light was cast across Mount Victoria. When the moon rose the shadows litterally raced away in one visible motion and everything was suddenly lit in shades of gray, it felt like the lights were turned on; I turned my video camera on to capture this light, though the camera only shows the moon and 100% black pixels, I wonder how dark it really was, my eyes had adjusted to the light and I lost perspective to how dark it actually was. The only colour in sight was the deep blue night sky and yellow chateau lights; the rods in our eyes (our low-light receptors) only perceive shades, this is why everything appears shades of gray in the most light deprived places, there were no colours that night, the landscape felt lunar under the moon's glow, I imagined the moon's surface would look similar to the rocky debris surrounding my 'camp'. I found it interesting how much "safer" I felt under the moonlight rather than in the shadows; consciously I knew it made no difference, though felt an ease subconsciously, maybe I now had a chance at seeing anything, if "anything" was out there.

I was holding out for sunrise, I wanted to be at the glacier to photograph the alpenglow, which occurs when the sun is below the horizon and the light is bent from debris is the sky reflecting a red band of light on the mountains. Unlike a normal sunrise alpenglow is not direct sunlight. I was lucky to capture this on my Moraine Lake sunrise shot in September 2008, though not so lucky this time, the best I got is above; it was worth the risk, you can guarantee not getting that shot if you're not there. I had used Google Earth's "Sun" funtion to plan my shots, I was pleased with how accurate it was; with sun enabled (under 'view') you can go to a location, select the time and it shows where the light and shadows will be, it was correct in the morning light hitting the top of Mt. Lefroy and Mt. Victoria (see comparison) as well as the light focused on Fairview Mountain (as seen in the first image on this page). Lake Louise is best shot before 8am when the sun is behind you (below image).

At this point I had been up from traveling to Lake Louise, hiking in 6km, staying the night (awake trying to stay warm) and hiking out 6km, I was using my poles (on flat terrain) just to keep my body level -- I was so tired. The above photo was taken just before I returned to my car at 9AM, the mountains seen across the lake is where I had spent the night. In the end, looking at these photographs and the excitement I had during the trip, it was certainly worth it all. Would I do it again? Yes, though probably not here; I was last here in 2006, when I left from this trip I admired the details in the mountain and wondered when I would return; I now have many photographs from this trail and look forward to new places. . .

If you've made it this far, thank you for reading.

Trevor
PS. Be sure to checkout the 360 Exploration from this evening where you can look around these views in 360 degrees. 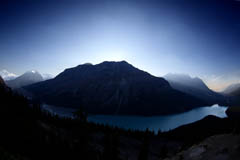 :: Newsletter ::
Enter your email address to join my newsletter.
Several download links will be sent in thanks :) Privacy/Frequency InfoYour email address will not be displayed nor shared in any way and you can opt-out at any time. Updates are sent at least 8 weeks apart.